Music to My Ears

Well, the 2014-15 school year is now in the pocket. We weathered our daughter’s high school graduation and all of the end of the year festivities for both her and our son, Riley (a rising upperclassman).  During these celebrations, we attended the end of the year orchestra concert. These concerts always kick off with the school’s Fiddlers’ group playing some folksy bluegrass and Celtic selections. As the show opened, I was watching one of Riley’s best friends walk in playing a solo to the left.  My husband kept nudging me, “pay attention”, and as I pan to the right…in walks Riley playing a lovely solo, leading in the rest of the group (video at the end). This is Riley’s 5th year playing violin, first chair, no less. Oh, did I mention, Riley was born profoundly deaf in both ears. 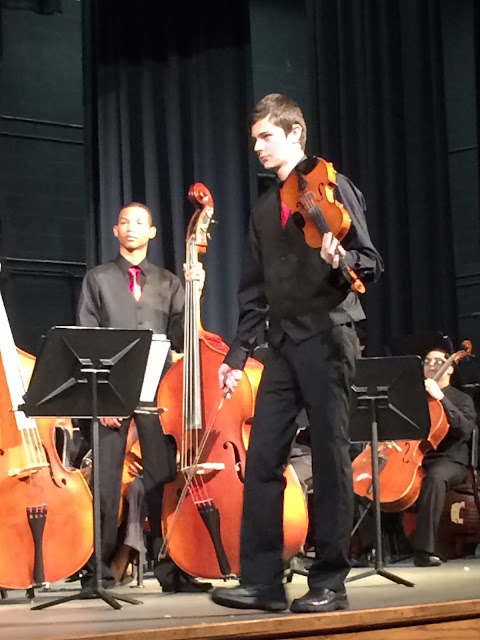 So, flash back 15 ½ years, when we received confirmation of Riley’s hearing loss. For me, the memories of holding him close, singing and telling him about the world, that he didn’t hear, haunted me. My (unfounded) fears of the future…would my Dad learn to communicate with his grandson or learn sign language; or will someone love him enough to spend the rest of their life with him, kept me awake at night.  For Matt, my husband, it was months later when we were driving down the road and he looked over at me with tears, the realization had hit him that the mixtape (yes, we are that old) he spent tireless hours creating for Riley's musical intro to the world…was never heard.

We got involved in early intervention, therapy, and toddler groups, learned about language, learned about technology.  My eyes were opened the day our early interventionist, now a dear friend, asked me if I was talking to Riley, singing to Riley, reading to Riley?  My answer, well, not really…he can’t hear me. Mind you, Riley wasn't our first child, I was raised by generations of educators, I knew to read, sing and talk to babies. It’s all about language, language, language, however, Riley came to me with a different set of instructions…so I thought.  We now saw things in a different light, let’s get language into him, let’s engage him in EVERYTHING.  On a positive note, I could sing at the top of my lungs without Riley crying (some do, honestly), he just saw my joy. As a family, we made the choice to pursue technology and commit to the hard work that comes with that choice, and no guarantees. We also chose to be hopeful… safety, improved auditory perception… enjoying music? Well, that would be the cherry on top.

We kept reading, we kept singing, we kept talking. I guess I should have been flattered when one of our speech therapists told me it was great that I was SO loud and talked SO much…not sure everyone in my life would agree.

We weathered the ups and downs, the successes and the defeats, the what ifs and why nots.  So, you see, this concert was a long time coming. His 16th birthday hits mid-July…he’s excited to get his driver’s license and asked for tickets to go see his favorite band, Imagine Dragons, with his friends (okay, he has also discovered his own taste in music, we tried).  The cherry on top… he now attends music festivals with us and entertains us at night, lip-syncing songs from the 80s, while we prepare dinner.

This is our story and having shared it, I also want to say that I have seen the same zest for music and dance at concerts and in music videos which are interpreted in sign language.

Have you seen the DJs and dancers out there who are Deaf and Hard of Hearing, too…you should! So, what does this all mean, it means find what feeds passion in your family and share that with your child. It means help your child explore what his or her passions may be and just leave out, “well, he can’t because he can’t hear”…throw it out, ignore it and explore it.
As I am writing this, Riley asked me what happened to the mixtape ...you know what, I don't know. Who has a tape player these days anyway, we will just make some new music together.
Here is the referenced Fiddlers' performance, if interested. Listen for the, "Pay attention." at :31.
Posted by Unknown at 7:48 AM No comments: